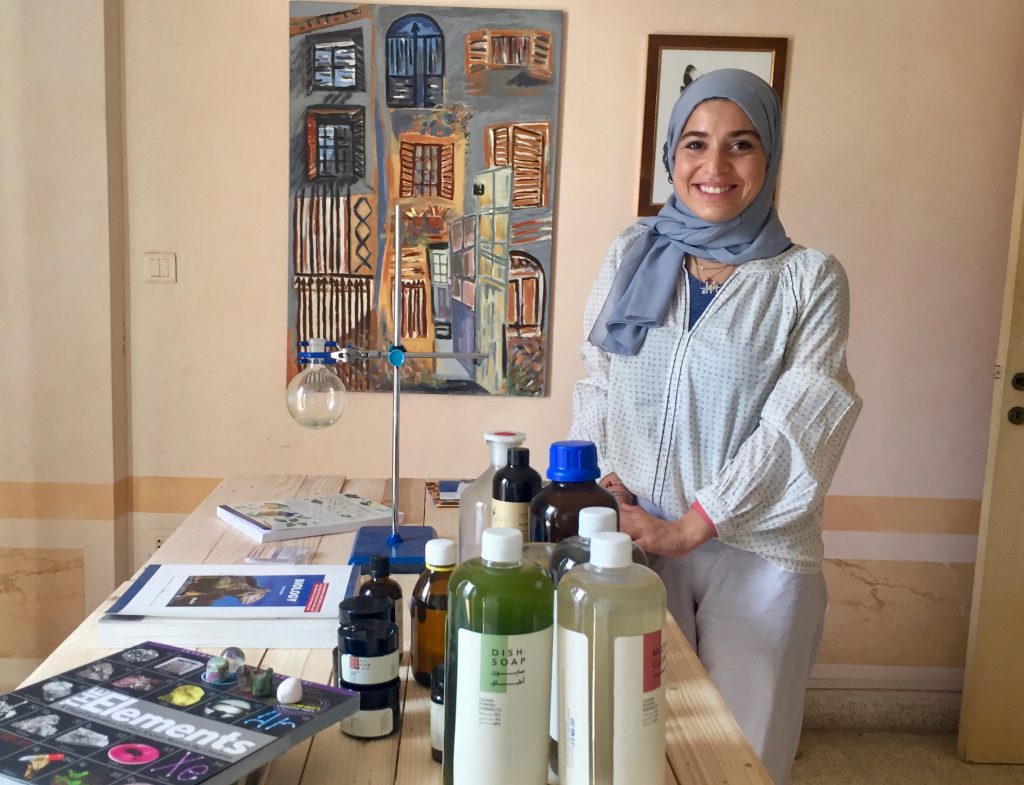 You see some things I can teach you. Some you can learn from books. But there are things that, well, you have to see and feel.

Telling story 1 – about how Batoul found her passion
At an early stage in her life Batoul experienced the loss of a friend and a cousin, both still very young, due to cancer. At that time, Batoul didn’t feel very comfortable with her own lifestyle and the experience was like an alarm for her. She started by changing her diet and eating habits and slowly expanded the new experience to other practices and products that she uses on a daily basis like cosmetics and home care. Batoul wanted to feel different and she tried many products. Firstly, she found that health and feeling good are related and secondly she realized that there were not enough local Lebanese products living up to green standards. This gave her the idea to try it herself and challenge the common sense in Lebanon that green eco-friendly products must come from abroad. Batoul searched for a way to combine her own lifestyle choices with her passion for chemistry and green technology. It guided her career choices and along the way defined her future profession.

Telling story 2 – about how she got convinced that everything is at the end human
Batoul worked for three years for the UNDP as a research consultant. She was involved as a chemist in a peacebuilding and environmental project. The natural resources fight is a prevailing topic in the Middle East and it could easily cause war. One of the biggest learnings for her was that one cannot separate technical and human matters if peace is the ultimate goal. To her, every technical field should always have a humanitarian aspect for example not allowing child labour in the process chain. This is the reason why Batoul took on the responsibility to manage projects with refugees and children four days a month. Using art to work on the struggles of refugees, especially those who have no allowance to visit schools, acts like a reminder for her during her busy days as an entrepreneur and green chemist to never loose focus on human matters.

Telling story 3 – about how she had to find her own identity
Batoul has been born and raised in Beirut right at the end of the civil war as the daughter of a Lebanese mother and an Iraqi born father. She remembers her childhood days free of war-related topics, it was not even part of her education in a secular school and nobody talked about it. The first time she became aware of sectarianism and separation within Lebanon was when she entered University. There, during students elections, she became aware of how interlinked politics and religion are in Lebanon and that she wasn’t given a choice to form her own opinion but rather was expected to vote for the party of her religious origin. As a consequence, she detached herself and tried to keep away from it ending up feeling lonely because nobody shared her background. It was a long process of finding out what really was important for her and to stand for herself and against others’ expectations. Even though the connection of religion and politics is not really an issue of her generation, she cannot fully step out of it. Her struggles were with herself finding her role and not letting others define her. She had to learn how to keep the balance.

Having a clear mission and following her passion
Actually, Batoul sees herself as a chemist and not an entrepreneur even though she took on the role when she founded Savvy Element in 2018. However, what is important for her above all is her passion. She followed it and starting the business was the way of communicating her ideas and vision and not the other way round. Becoming an entrepreneur initially never was an option for her, it just happened to be the best way for her. Of course, with a limited budget and starting off on her own, she had to compromise and set longer term targets. These allow her to fulfil all her ideas on circularity of her products, she learned to trust the process. Batoul developed a plan with milestones so that she wouldn’t get caught up in the process. For her, being an entrepreneur is not what defines her it is the means for her to achieve her mission.

Question your believes and be open for new things
Did you know that there is good and bad chemistry? It all depends on how you use it. Batoul finds it very helpful that she understands the elements and their composition to use them in a way to achieve something good for the environment and circularity. Next, natural products are not per se healthy. Think of lead, it is a natural element, you find it in many cosmetic products. Its sensible use depends on its dosage but it is definitely not healthy. Batoul has it all thought through. For her, to be innovative one has to really understand the concepts behind.

When Batoul arrived in Berlin for her work, she was invited to visit a waste treatment plant. Batoul at that time was clearly against incinerators and started her discussions there full of scepticism. However, at the end of the day she learned that if treated properly, incinerations can be a useful and environmentally friendly way of processing waste. Her experience with it coming from a Middle Eastern country couldn’t be a positive one but in a world with waste separation and high standard incinerators, the effects can be very different. We all experience these kinds of self limitations based on previous experiences. For Batoul, it showed her how important it is to balance out her convictions with an openness for new ideas and challenging own believes.

Batoul’s views on present and future

Batoul didn’t have to think about this question, she prefers to focus on what’s going on now?! The course of things in her life were unexpected and she doesn’t plan long term which seems surprising given the fact that she founded a business and took the responsibility of an entrepreneur. But to her, the future is vague and uncertain, it might scare her and prevent her from doing things. Batoul wants to maintain spontaneity as a driving force in her life.

the world would be much better without … borders!
Looking at her families’ history, Batoul thinks that geography and ownership of land have a devastating effect on people. Her father’s family had to flee Iraq, she has been brought up in a country after a yearlong civil war and today’s borders of Lebanon with Israel and Syria are only matters of conflict if not war. For whom is this country? She would prefer to think about coexistence and rules based on ethical values and behaviours.

Learning and teaching
Batoul wants to learn calligraphy. It is the process and patience in creating something beautiful that attracts her. She would also like to learn German.
Batoul loves to share her experience and empowering others to use this knowledge to improve their daily lives and become more sustainable. Batoul runs workshops on circularity and green technology. Her plan is to open up a Concept Lab for people and customers to see and experience the end process of the production. Green chemistry in an interactive space for more savvy talents!